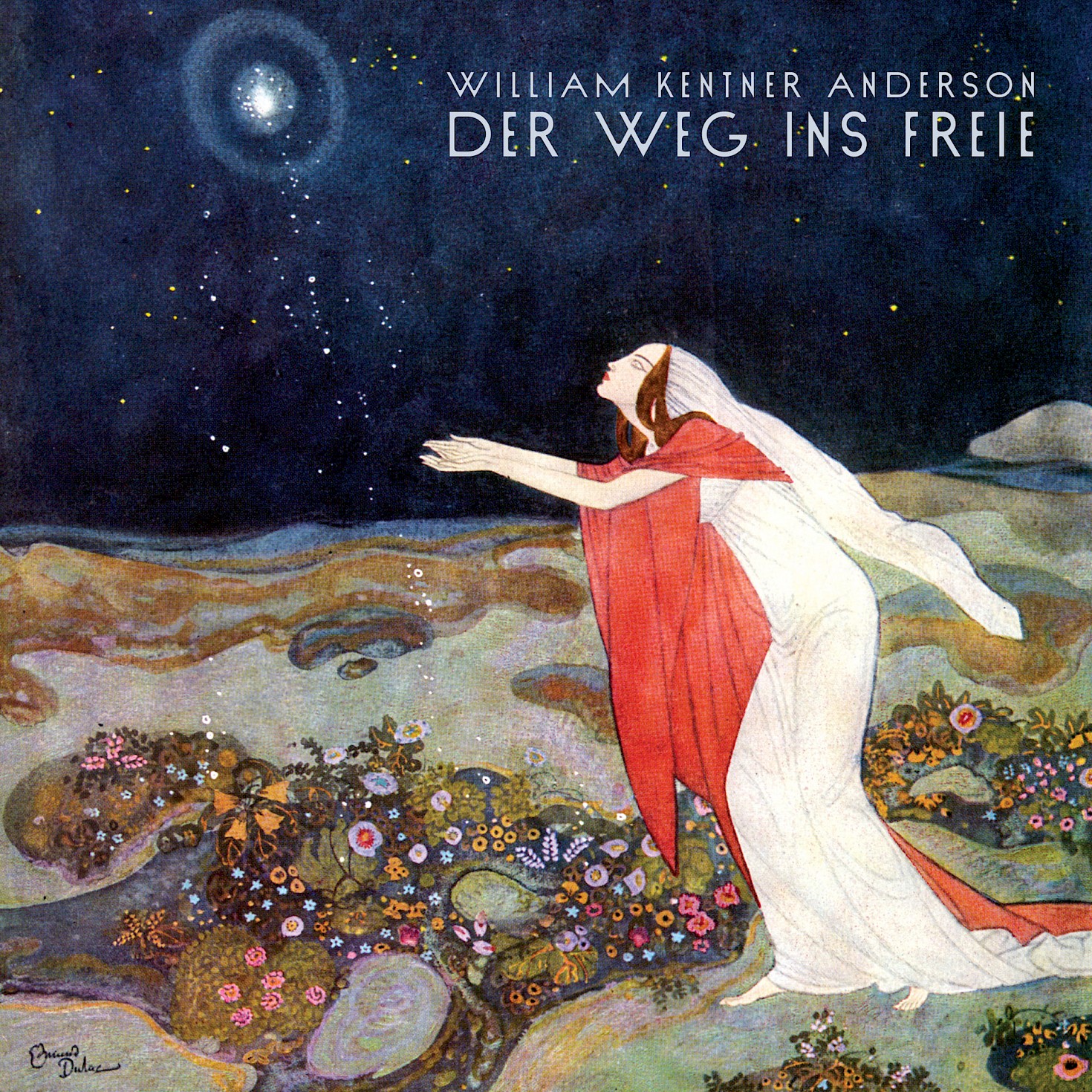 Guitarist/composer William Kentner Anderson, "the alert guitarist" (Paul Griffiths, NY Times), has been a champion of new American music for 35 years. He founded the Cygnus Ensemble, and is Artistic Director of Marsyas Productions and the Roger Shapiro Fund for New Music. Anderson's music is not like anything else, often engaging with simple musical materials-pop songs, folksongs and folk lyrics. He breaks barriers-asking his guitarists to sing backup vocals, incorporating Tibetan overtone singing in his setting of Djuna Barnes' "Paradise", integrating an uillean piper into the Cygnus Ensemble. Anderson began performing chamber music at Tanglewood at age 19, gigged with the NY Philharmonic, the Metropolitan Opera Chamber Players, under James Levine, the Chamber Music Society of Lincoln Center, and the Theater Chamber Players in Washington, DC.

Composer, guitarist William Anderson began playing chamber music at the Tanglewood Festival at age 19. He later performed with the Metropolitan Opera Chamber Players, Chamber Music Society of Lincoln Center, NY Philharmonic, and many other NYC-based ensembles and organizations. He was a member of the Theater Chamber Players, the resident ensemble at the Kennedy Center in Washington DC. Anderson founded the Cygnus Ensemble in 1986. Cygnus is based in New York and has toured in Europe and Asia. Cygnus was in residence at the Library of Congress in 2012. Anderson has been Artistic Director of the Roger Sh apiro Fund and Marysas Productions since 2011. His compositions have been presented in guitar festivals and new music festivals in the US, Asia, and Europe. Recently, his T-räume, in collaboration with poet Katharina Johanna Ferner was performed by the Gunnar Berg Ensemble at the Mozarteum in Salzburg for their annual Bloomsday celebration. Many of his works are recorded and can be found on Furious Artisans, Marsyas Productions, and Bridge Records. Anderson teaches classical guitar at Sarah Lawrence College and Queens College.

Cygnus, with its pairs of plucked strings, bowed strings and woodwinds, is related to the Elizabethan “broken consort”, and brings the lightness and transparency of Baroque performance practice to a body of works cultivated by the group over a period of 30 years. Cygnus has had residencies at Library of Congress, Sarah Lawrence College, the CUNY Graduate Center, University of Wisconsin, and UC Sacramento. Cygnus toured in Russia, Holland, Denmark, Poland, Mexico. Sounding Beckett, directed by Joy Zinoman, sold out for its two-week run, alternated Beckett’s abstract and musical “ghost” plays with new musical works written by 6 composers, each in response to one of the plays. It was praised in the NY Times and the Washington Post. Cygnus has recordings on Bridge, CRi, and Furious Artisans, and appears on other recordings on Naxos and Albany.
cygnusensemble.com

Vox n Plux combines guitarists William Anderson and Oren Fader with noted soprano Elizabeth Farnum. Anderson and Fader have been performing and recording with Farnum for two decades, as members of the two-guitar based Cygnus Ensemble. The trio has been heard in concerts in New York (Weill Hall at Carnegie), New Jersey, California (Festival of New American Music), and other states. Vox n Plux specializes in contemporary music, especially the work of American composers, and also performs music by the early masters (Monteverdi, Dowland, and Bach). Vox n Plux also offers voice paired with other instruments, including classical and electric guitars, mandolin, banjo and theorbo.

The Bowers Fader Duo performs in New York City and across the US. They have been the featured performers on the NYC presenters Soft Series and Composers Concordance. premiering new works written for them. Created in 2009, the Bowers Fader Duo performs both classical and contemporary repertoire. Their ongoing mission is to promote new American art songs for mezzo and guitar, through commissions, performances, and recordings. To date, they have presented over 20 world premieres of works written for them. In the fall of 2016, the Duo created the New American Art Song Concert series, presented annually, featuring new works written for the Duo. In addition to this, they perform across the US. They recently released their debut album, “Between Us All” on New Focus Recordings, with songs by Paul Salerni, David Claman, Scott Wheeler, and Tim Mukherjee.
bowersfaderduo.com

Haleh Abghari is a native of Iran and has performed internationally as a singer and actor. The NY Times hailed her work as "a virtuoso and winning performance," and the Washington Post described her voice as “high, dry, sweet and piercingly pure soprano." She teaches at the University of Colorado in Colorado Springs, where she serves as the head of the voice program. In addition to working with many composers and giving numerous premiers, Abghari has created original music and multimedia pieces, and collaborated on installation-performances with visual and performance artists. She was awarded a Fulbright Scholar Grant to work on the vocal music of György Kurtág in Budapest. In her creative projects and her teaching, Abghari continues to promote active citizenship and civic dialogue through the arts.
halehabghari.com

Conductor Mark Shapiro is a true Renaissance spirit, equally at home with orchestras, choruses, and opera, and as a lecturer, presenter and teacher. His quick musical reflexes, keen intellect, organizational expertise and humorous, easygoing manner have won him a welcome reputation as a dependable presence in high-stakes situations (including emergencies!). Shapiro is unique among North American conductors for having won a prestigious ASCAP Programming Award six times, at the helm of three different ensembles over a two-decade span, with The New York Times singling out his “spirit of adventure” and The New Jersey Star-Ledger characterizing his artistic leadership as “erudite and far-reaching.” The New York Times has praised Shapiro’s conducting as "insightful” and has noted his “virtuosity and assurance” as well as the “uncommon polish” of his music-making.

The New York Times praising her “honeyed tone”, Elizabeth Farnum is widely known for her high level of musicianship, versatility and range. She has performed at Lincoln Center, Alice Tully Hall, London's Institute for Contemporary Art, the American Academy in Rome and the Amsterdam Concertgebouw. Elizabeth maintains an interest in many diverse musical styles, and her various interests have led her to performances on Broadway, the Metropolitan Opera, and throughout the world on tour with acclaimed early music groups Pomerium and the Waverly Consort. In the oratorio and concert fields, Elizabeth has appeared as soloist with, among others, the Brooklyn Philharmonic, the American Symphony Orchestra, the Riverside Symphony, the La Jolla Symphony and Musica Sacra.

Kirsten Anderson (a.k.a. Freya Rohn) is a writer and museum curator. She has an MFA from the University of Alaska Anchorage, where she was a recipient of the Jason Wenger Award for Poetry. Her poems have appeared in several publications, including The Colorado Review, Sugarhouse Review, Bellingham Review, Catamaran Literary Reader and Cirque. She lives in Anchorage, Alaska, with her husband and son.
freyarohn.com

Winner of the 2016 Guggenheim Fellowship, and 2016 Koussevitzky Award, violinist/composer David Fulmer is a leader in his generation of composer-performers. The success of his Violin Concerto at Lincoln Center in 2010 earned international attention and resulted in immediate engagement to perform the work with major orchestras and at festivals in the United Kingdom, Europe, North America, and Australia. Fulmer made his European debut performing and recording his concerto with the BBC Scottish Symphony Orchestra under the direction of Matthias Pintscher in 2011. That same year, Fulmer made his debut at Tanglewood appearing with the work.
fulmermusic.com

Isaac Alderson was born in Chicago, where he began playing the uilleann pipes, Irish flute, and tin whistle as a teenager. He moved to New York in 2001 and began his studies at Sarah Lawrence College. In 2002 he won the Senior All-Ireland Championships on all three of his instruments. He has performed and taught across the United States, Canada and Ireland as well as in Colombia, China, and much of western Europe. He is a founding and continuing member of The Yanks, whose recordings and performances have earned accolades in Ireland and across the global Irish music community. He is based in the Bronx, New York City.
isaacalderson.com