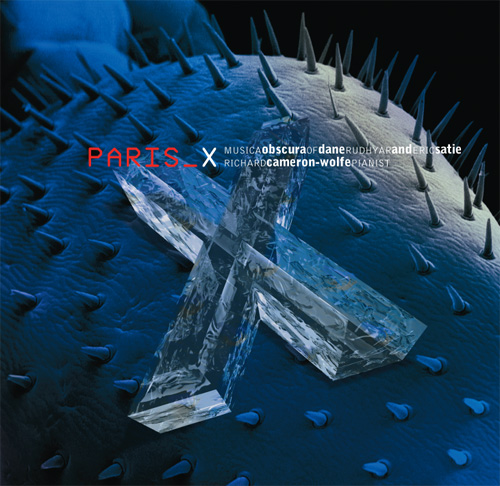 Paris X brings together music by the X-patriate Dane Rudhyar (1895-1985) and the X-centric Erik Satie (1866-1925), two Parisians whose personal acquaintance was slight but whose music and artistic vision offer a fascinating tapestry of similarity and difference.

Richard Cameron-Wolfe encountered the piano music of both Rudhyar and Satie while a student at Indiana University in the late ‘60s and early ‘70s, where his piano teachers included Joseph Battista and Menahem Pressler and where he studied composition with Bernhard Heiden, Iannis Xenakis, and John Eaton. Neither Rudhyar nor Satie figured directly in his academic training, but both exerted a profound influence on the shaping of his individual artistic identity.

The new compact disc (Furious Artisans FACD 6087 ..) is a recording of piano music by pianist/composer Richard Cameron-Wolfe, who does justice to Rudhyar’s abrupt and impassioned side. (The disc also includes a rare Erik Satie ballet, Uspud, and one of Cameron-Wolfe’s signal achievements is that he has performed Satie’s Vexations, a 24-hour repetitive work, by himself rather than as part of the usual team of pianists.) Cameron-Wolfe includes two previously unrecorded early Rudhyar works from his Parisian period, Lamento (1913) and Cortege Funebre (1914), dark, original, and not as Debussyan as you’d expect from the fact that the young avant-gardist had written his first book on Debussy in 1913. The other Rudhyar works are Tetragrams Nos. 3 and 8, from the late 1920s, which as far as I know are also world premiere recordings. This is absolutely top-shelf Rudhyar, taut, mystical, thoughtfully explosive."

"..These rugged, mystical Rudhyar works from the 20s are reminiscent of Ruggles in their dissonant, elemental power; the early ones, especially "Cortege Funebre", are more perfumed and more French, but still massive and noble. Richard Cameron-Wolfe, a Rudhyar specialist who befriended the composer in the 70s, plays with a big sonority in fortissimos and silken tone in the soft passages. The recording is strong and resonant, as it must be. Just as radical in its quiet way is Satie's 1892 "Christian ballet” USPUD for narrator and piano, a spare, minimalist quasi-religious work ... admired only by Debussy among major composers. ... Kathryn Philip's raptly understated narration and Cameron-Wolfe's sensitive playing conjure an austere rapture unique to this composer."