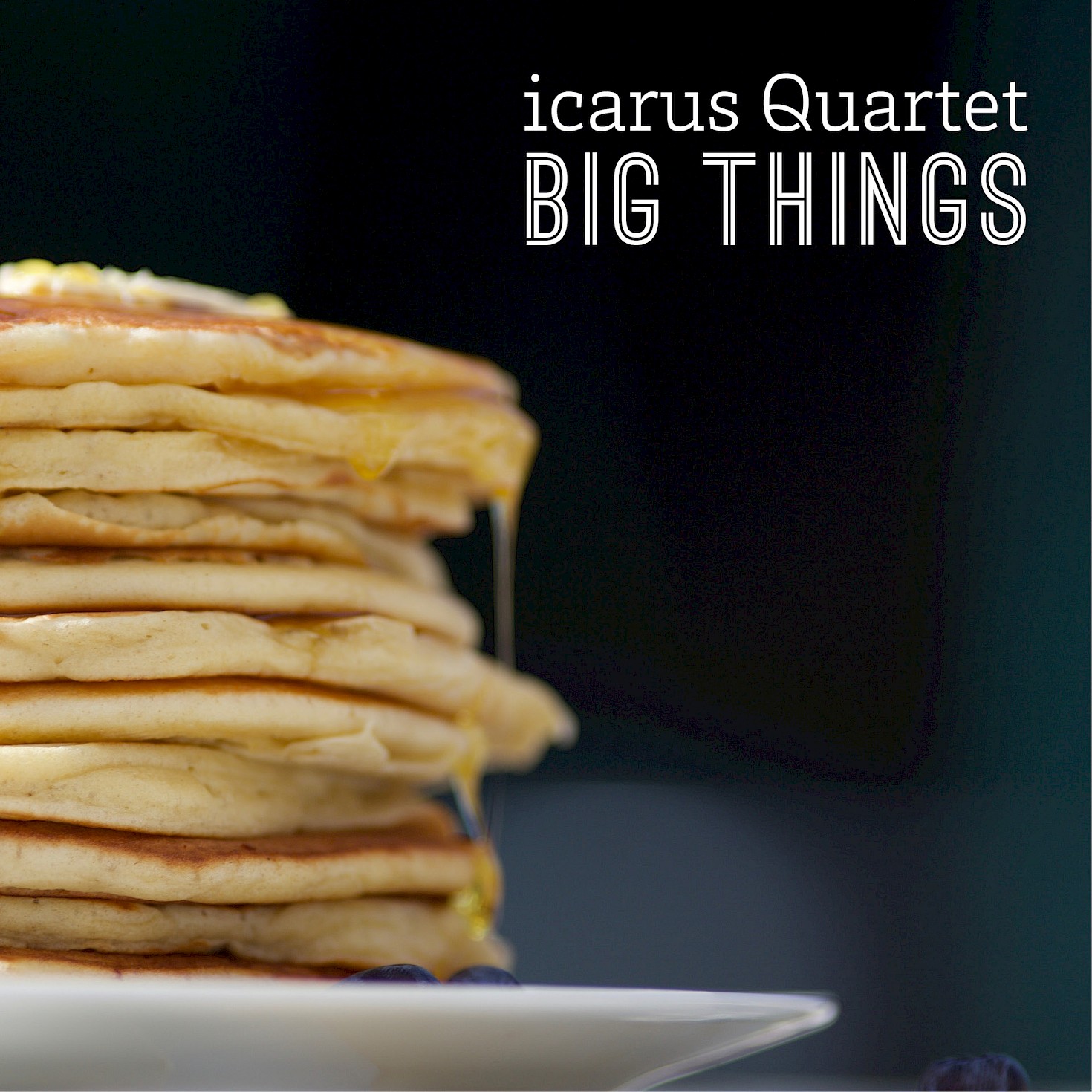 icarus Quartet’s debut album, BIG THINGS, is comprised of three substantial works by composers Michael Laurello, Brad Lubman, and Paul Lansky that have helped catalyze the unmistakable aesthetic of this half piano/half percussion group. The album opens with Michael Laurello’s rhythmically driving “Big Things,” an arrangement dedicated to icarus Quartet. Brad Lubman’s “Tangents” eschews any given or predictable narrative in favor of a nonsensical dreamworld that also inspired the pancake-themed album art. Paul Lansky’s eight-movement work “Textures” celebrates the multifarious sonic potential of percussion and piano together. Laurello, Lubman, and Lansky have each been elemental to the existence of the ensemble and it is with great pleasure that icarus Quartet shares their music on this energetic 60-minute tour de force.

From the program notes:

Is your mouth watering yet?

Your ears will be glad to hear that this album sounds as good as it looks. We are ecstatic to share our first release, BIG THINGS — a triple stack of pieces that fuel our souls like comfort food in the company of good friends. Each of these pieces has helped catalyze the aesthetic of icarus Quartet, and each of the three composers has been elemental in the existence of the group.
Paul Lanksy attended our second performance at Carnegie Hall, and has since been an ardent supporter, even requesting that we play Textures on his 75th birthday tribute at Princeton University. Brad Lubman visited us for a rehearsal before our New York premiere of Tangents, and our time going out for ice cream as we talked about life and music remains a cherished memory. Michael Laurello was our ear training TA, just an unassuming, quiet guy in the corner, who also happened to write some of the tastiest music we had ever heard. He’s now been our closest collaborator for seven years, with multiple pieces, premieres, and recordings across various projects.

icarus Quartet’s music certainly demands exactitude of execution, but we revel in the opportunities for spontaneity of energy and expression. Fortifying these interpretations as permanent documents was a BIG deal, and as our esteemed producer Elaine Martone says, “recording ups the ante.” While this whole endeavor of creating an hour’s worth of audio to represent our group has been a massive undertaking, it has been even more so a celebration of all of the people and music involved in our journey thus far, and we are so privileged to finally share it with the world.

So park yourself at your local brunch spot, whether at the corner booth or in the corner of your mind, grab a pair of headphones and delight in the multifarious textures that tantalize the taste buds with each successive bite. icarus Quartet takes great pleasure in filling your plate for the next sixty minutes with BIG THINGS.

“The original version of Big Things was one of the first pieces I composed using a process of recording and improvisation, rather than traditional notation. I started with a rhythmic pattern outlined by an electric guitar (played by marimba in this new version for icarus Quartet), and then improvised other instruments over the top. I recorded most of the instruments myself, section by section, editing each part in my recording software as I went. With this method, I felt free to experiment without worrying about what it might look like on the page. There were a few happy accidents, too: In one section, I made a copy-paste error, and the music ended up displaced by a sixteenth-note. It sounded interesting when I listened back, so I kept it. Once I was satisfied with the recording, I transcribed the music and created the score and parts for live performance. When I played the finished recording to a friend of mine, she said it sounded like “big things…big life things.” I’m not sure what she meant by that, but it felt right, so I went with it. The updated version of the piece, arranged for two percussionists and two pianists, is dedicated with love to icarus Quartet.”

“I have always been fascinated by the types of complex and sometimes nonsensical or irreconcilable narratives one may find in certain dreams. Additionally, I enjoy the various odd or extraordinary coincidences that sometimes occur in everyday life. Along those lines, I construct much of my music to avoid following a given or predictable narrative. Here’s an example: You think you’re about to bite into a steak but it actually turns out to be peanut butter ice cream which, as you’re eating it, turns into a beautiful salad that turns out to taste like the steak you thought you were about to eat, when you realize it’s none of the above and you’re simply holding a glass of sherry which as you sip it turns out to be a review textbook for algebra which you then drop onto the table in shock, noticing that it was actually a stack of pancakes. My idea is to enter a world of dreams, where the imagination flows freely from moment to moment, so that each turn of events is about the moment we enter the moment.”

“I love writing percussion music. It’s a lot like making computer music, which I did full-time for more than 35 years. On the machine you work with spectral balance, envelope, timbre difference, etc. In the percussion world this near infinitude of possibility is matched by the vast potential among percussion’s families of woods, metals, mallets, skins, toys, etc. The unusual instrumental combination of two pianists and two percussionists, first used by Bartók in his Sonata for two pianos and percussion, begs for scoring that brings the instruments to the edge of their respective sonic potentials. Pianos can function as percussion instruments, and percussion can explore its tuneful side, particularly through mallet instruments. The idea of “textures” occurred to me almost as soon as I started writing. I didn’t first decide on a specific texture and then compose with that in mind. Rather, I jumped in, arms flailing, and then found the focus for a movement once its texture and musical ecology became clear. Basically, the piece is a celebration of this ensemble’s unique sonic potential.”

Like the mythological figure from which it draws its name, the half piano/half percussion icarus Quartet dares to fly towards the sun, aspiring to new heights of artistry. Winner of the 2019 Chamber Music in Yellow Springs Competition, icarus has given new life to old masterpieces as well as the future of their instrumentation. Fostering the development of new works through commissioning and collaborating lies at the core of the group’s mission, inspiring partnerships with titans of the classical contemporary field, established artists of electronic and indie music scenes, as well as gifted student composers through their annual “iQ Tests” program. Larry Weng, Yevgeny Yontov, Matt Keown, and Jeff Stern are all celebrated soloists in their own rights, and together they have found a special chemistry and inimitable joy playing chamber music, combining their classical training with a forward-looking vision of the modern concert experience. While the icarus Quartet members largely agree on musical matters, their breakfast choices diverge – Larry likes blueberry pancakes with whipped cream and butter, Yevgeny takes his plain with fresh berries, Matt prefers German pancakes with lemon, powdered sugar, and syrup, and Jeff swears by the cinnamon roll pancake at The Pantry.

The work of Michael Laurello reflects his fascination with temporal dissonance and emotional immediacy. His compositions have been presented at venues such as Carnegie Hall, Lincoln Center, MATA, PASIC, and the Bang on a Can Summer Festival by some of today’s most cutting-edge ensembles. In addition to his work as a composer, Mike is a freelance engineer, and serves as Manager of Recording Services and Technical Engineer for the MidAmerican Center for Contemporary Music at Bowling Green State University. When it comes to pancakes, his favorite kind is buttermilk, but he shares Jeff’s reverence for The Pantry’s cinnamon roll short stack.

American conductor and composer Brad Lubman has gained widespread recognition for his versatility, commanding technique, and insightful interpretations over the course of more than two decades. Brad is the Co-Artistic Director and Conductor of Ensemble Signal and regularly conducts some of the most important European and American orchestras and ensembles for contemporary music. He is also Professor of Conducting and Ensembles at the Eastman School of Music, as well as on the faculty at the Bang on a Can Summer Institute. As a kid, good ol’ fashioned regular pancakes with real maple syrup were Brad’s favorite.

Horn player turned computer music pioneer turned classical composer and now William Shubael Conant Professor of Music Emeritus at Princeton University, Paul Lansky is a totem within the landscape of American music. The sophistication of Paul’s compositions resides beneath the surface, taking a backseat to the visceral and emotional qualities of his music – quirky, nostalgic, and bursting with character. His music has been performed by ensembles around the world, choreographed by dance companies such as the New York City Ballet, and sampled by English rock phenomenon Radiohead. Paul’s favorite pancakes are served with blueberries, maple syrup, and ice cream.