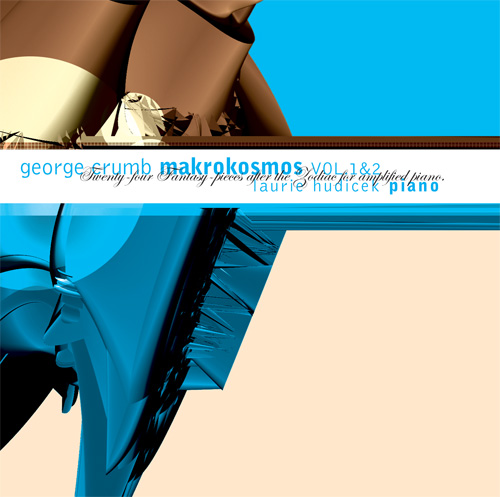 Although composed fairly recently (1972/73), George Crumb’s two volumes of Makrokosmos: Twelve fantasy-pieces after the zodiac for amplified piano have proven to be hallmark compositions of 20th century solo piano music. These monumental works, 24 pieces after the zodiac, are tackled by relatively few artists in the music world today.

For not only do these pieces stretch the imagination and test the technique of the performer, they also reach beyond the realm of certainty, beyond that which is concrete and comfortable, and beyond the security of the keyboard. Within these works, Crumb suspends reality to such an extent as to bring the listener and the performer to a place that hasn’t been visited since childhood.

While we remember the monsters under the bed or the glowing eyes in the corner of our dark room as we sought the solace of our dreams, we know that there was a world between being awake and being asleep. Although frightening to most children, this was a part of ours lives, and we lived knowing that it was there, this place to run to when sad or run from when sacred. This was a place where we knew ourselves and could experience the unknown. George Crumb can still see this world and has so expertly described it to us through his Makrokosmos that the uneasiness we felt as children on the verge of sleep comes flooding back upon first hearing. The fine line between fantasy and reality, where dreams can seem real and reality seems an illusion, is the place in which these 24 fantasy pieces exist, a “dream within a dream” as another American icon may have described it. We question at times if we are hearing things or if these otherworldly sounds are part of Crumb’s plan.

"Pianist Laurie Hudicek tackles what many consider to be one of the monumental pieces of 20th century repertoire for solo piano. ..A great recording of a true masterpiece."
– New Music Box

"... It takes a daring musician to pull it off with such aplomb. Hudicek attacks the piece with equal parts finesse and sass, resulting in one of the more provocative CDs for solo piano to come along in quite a while."
– Andrew Ervin, Washington City Paper, August 2-8