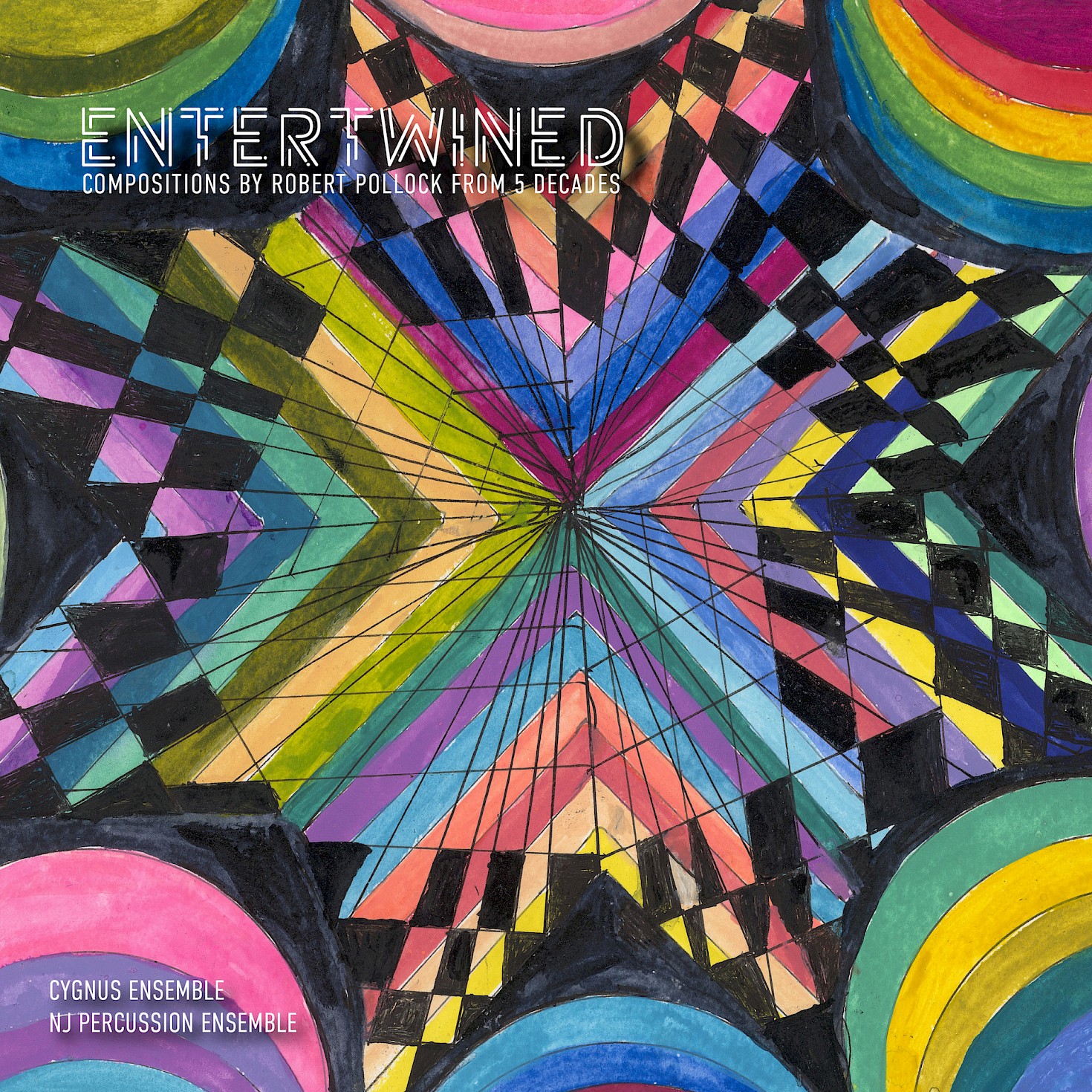 Cygnus releases “Entertwined: Compositions by Robert Pollock from 5 Decades”, featuring guitarist William Anderson, Cygnus, and the NJ Percussion Ensemble. The CD begins with "Revolution", commissioned for the US bicentennial, and from there, traces Pollock’s remarkable development. Pollock's voice is as distinct as his sound world featuring plucked strings and percussion. Paul Griffiths, in The NY Times, reviewed the NY premiere of Pollock's work for tutti Cygnus, saying, “Robert Pollock's luscious ''Cygnature Piece,''.... full of beautiful blendings, empty of expressive cliche, splendid and sonorous ...." Robert Pollock is a critically acclaimed pianist and composer, awards including NEA, Guggenheim, ISCM. He toured the world with the Cygnus Ensemble, the NJ Percussion Ensemble, and as a concert pianist. He has been and remains a tireless proponent of the music of his contemporaries, founding the Composers Guild of New Jersey and Ebb & Flow Arts in Hawai'i.

Robert Pollock, born 7/8/46 in New York City, is married to Klazine, with one daughter, Esther, and two granddaughters, Celeste, Beatrice. Robert Pollock received a B. A. in Music from Swarthmore College, an M.F.A. in Musical Composition from Princeton University, and a Guggenheim Fellowship in Musical Composition. He is co-founder of the New York Guild of Composers (1975), and founder/director emeritus of the Composers Guild of New Jersey (1980-1998). Since 1999, Pollock has directed a contemporary music and arts presenting organization, Ebb & Flow Arts, Inc., in Hawai'i. He has organized over 500 new music concerts. As pianist he has premiered over 100 compositions by composers from around the world. He has performed solo piano recitals in the United States, Europe, and Asia. He participated as composer-in-residence in Composer in Residence Day, William Paterson University, and the Festival for New American Music, Sacramento State University.

Some of his over one hundred-forty (140) compositions received recent performances throughout the world. He is the recipient of Composers String Quartet Award (first prize), and grants from NEA, NJSCA, Martha Baird Rockefeller Fund, and Ingram Merrill Foundation. He is fellow of MacDowell Colony, Virginia Center for the Creative Arts, and Millay Art Colony. Several of his works are recorded for CRI, CGNJ, Maui Institute for Modern Music, Furious Artisans, and Union of Composers, Tatarstan, Russia, labels. His works are published by Mobart, E.C. Schirmer, Veritas Musicae and Rosalime Productions.

CYGNUS ENSEMBLE/Entertwined: A progressive modernist that's won everything out there except a MacArthur, Robert Pollock experiments with sound and when he plays the piano---he really plays the piano. Actually, to the left of being Sunday afternoon wine and cheese music, there's no pots and pans and what there might be lacking in linearity, there's plenty of passion to make up for it. A contemporary classical set that you can approach without fear or apprehension.

Robert Pollock (born 1946) is more determined than Constant was to evoke a highly personal sonic world, doing so not only in ensemble pieces but also in material for two performers or just one. A new CD on the Furious Artisans label makes this point through seven works created by Pollock from the mid-1970s through 2007. The most-recent piece, written for guitarist William Anderson and pianist Joan Forsyth and performed by them, is Romance-Fantasy, which features highly complex rhythms and some typically contemporary attempts to extend the sound of the participating instruments (including making the guitar into more of a percussion instrument than it actually is).

In the ever unfolding world of New Music sometimes it is all about how novel and unprecedented the music is on some level. Other times it is about how well written, how inventive it is. Today we have something of the latter.

Robert Pollock is a name that did not ring bells for me when this CD arrived recently. Entertwined (Furious Artisans FACD6827), which is subtitled Compositions By Robert Pollock From Five Decades, is a program of some seven chamber works that are thoughtfully and lucidly made up in ways that hold their interest as a whole on first listen and distinguish themselves even more so with repeated listens.

New York-born composer Robert Pollock’s music is finely crafted and always impressive. It certainly inspires the booklet annotator, the renowned Paul Griffiths, to wax lyrical; and how right Griffiths is to highlight the sense of flow in Pollock’s music, a trait that acts as a unifying thread throughout the seven pieces presented here. A much-lauded composer in terms of awards, Pollock demonstrates a sure ear in the harmonies and textures he employs, and a firm compositional hand (in the sense he always knows exactly how to create a cogent structure).

This is a fascinating disc of music by a most compelling composer. The performances are of the first rank throughout.

Robert Pollock is a composer from NY who is in the school of Roger Sessions and Milton Babbitt. From his works we can feel not only those influences but also his frontier spirit and endless creativity. The title Entertwined is an original word made from entertain and intertwine. It suggests that the listeners are entertained by the varieties of intertwined sounds and their effects of the instruments. Five pieces featuring guitars are structured based on the chord with open strings and fourths. His works entertain audiences by the harmony including diatonic and pentatonic scales which go beyond Babbitt’s influence.